Home COMICS Laughs and the DC Animated Universe: An Interview with Heath Corson 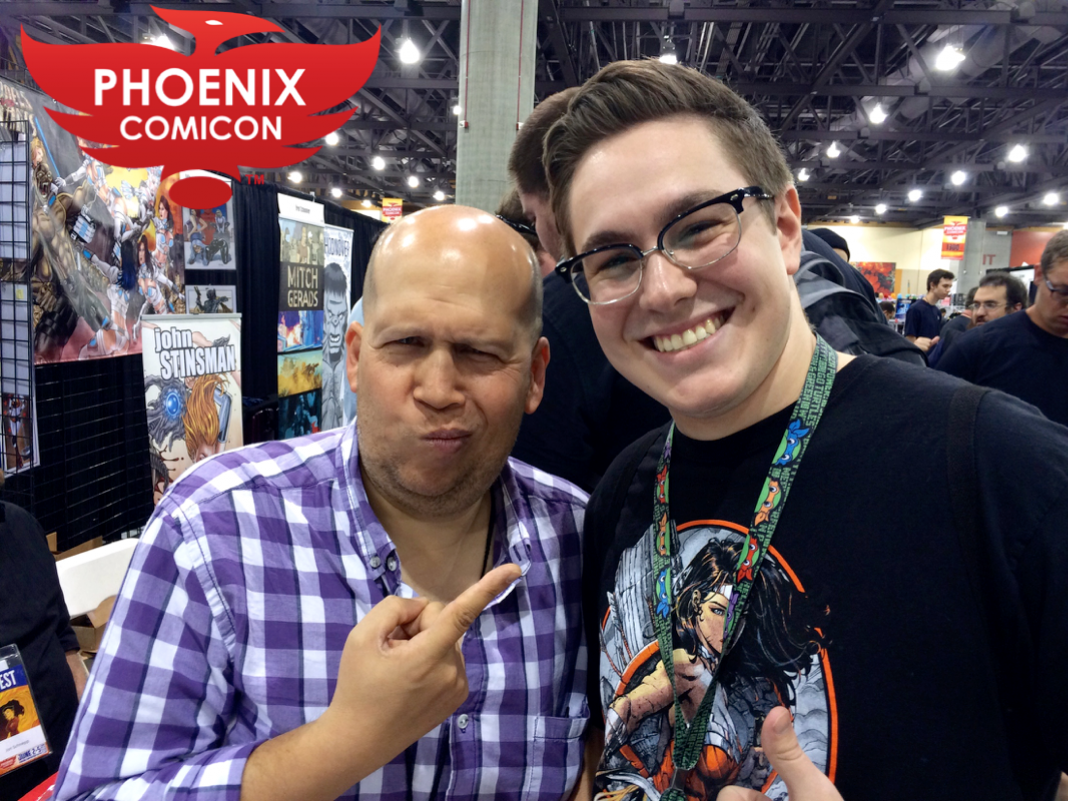 As an Arizona native and a contributing writer for The Source, this weekend I had the fortune of talking to multiple comic book creators, artists, and writers at the annual Phoenix Comicon. Taking place over four days at the Phoenix Convention Center, I lived, breathed, and absorbed comics and heroes underneath a dependably blazing Arizona sun. During my time between panels, exploration, buying comics, breaks for mustache shaped pretzels, and mandatory stops for water, I interviewed some of the talented guests the con managed to acquire.

Of these fantastic guests, there was a god among men, a real titan, mister Heath Corson. He spends his life behind the scenes as a writer, producer, and a DC Comics Historian. From his writing on Justice League: War, successfully rebooting the DC Animated Universe, he went on to write Batman: Assault on Arkham, featuring an animated Suicide Squad. He also wrote Justice League: Throne of Atlantis, giving Aquaman his own origin film. In addition to animated features, Heath has written for the Bizzaro comic book series and the web series, Aim High. Currently, he’s a staff writer on MTV’s Scream: the TV Series. You can keep up with all of his work and exploits as a self-proclaimed “criminal mastermind” by following him on Twitter: @HeathCorson.

In a moment of peace, I managed to grab Heath’s attention for a short interview, agreeing to hook him up with a Batman Hat for a few minutes of his time. We discussed the DC Animated Universe, his title of “DC Comics Historian,” and some of his other projects.

Of course, we had to start this interview by discussing the new DC Animated Movie Universe, so I asked…

“I did. Guilty!” Heath exclaimes, causing us both to laugh.

What was that process like, and how did you know where to begin?

“It was terrifying,” he repeated, “because I don’t want to be the guy who screws up Justice League. Because we’re setting the tone to move forward, so it was really, really scary. Once I found the voices of like who… how each character connects with every other character and what those dynamics were, everything sort of fell into place for me.”

But once again, in conclusion, Heath repeated, “But in the beginning, it was really scary,” which informed me, the DC comics lover, that the DC Animated Universe is in good hands. Heath is clearly aware of the pressure that weighs upon him, and luckily for us fans, that weight has resulted in some of the best animated, comic book movies.

To further my line of questioning, I asked the following question: Did you ever think about toying with the line-up a bit more or just kind of sticking to formula?

“That’s a much longer question. You know that we didn’t mess with the line-up, but we did have Shazam instead of Aquaman. So that was… that was a big deal,” Heath replied.

He did go on to inform me why Shazam was chosen for Justice League: War instead of Aquaman. “They told me I couldn’t have Aquaman, and they didn’t tell me why,” Heath said, looking as if I had opened an old wound. “It was because they were saving him for his own movie, but of course they’re not going to tell me that right off the bat. So that was something I was like ‘Oh, man!’”

He then continued, “But yes, then they called me when I was doing the outline and said, ‘Well, do you need Flash?’”

At this point, Heath reproduced the face one naturally makes when asked, “Do you need Flash for that Justice League movie?” To which he replied more politely than “duh” by saying, “And I was like ‘YEAH, I need Flash.’ And they were like, ‘Well you better use him in a really good way, or we’re going to take him away from you.’ And I was like ‘Oh, no.'”

Eventually, he got back to Shazam, “So yeah, there was a lot of upheaval. But I figured because we already had Shazam, it was going to be a different experience. We’re not going to be telling the same story. So that gave me a lot of wiggle room, you know? It was already a completely different thing.”

From here I had to ask my burning question. I had to know if Heath could spoil the future!

So the latest release was Justice League vs. Teen Titans, and we have Killing Joke coming out later this year.

What else is in store for the future? I know there’s been talk of a Wonder Woman-centered film and the possibility of Superman: Red Son.

“That would be great,” Heath replied, “But there is absolutely nothing I can mention or talk about.”

Heath and I agreed that it was worth asking, but even as Heath answered “No,” his friend sitting just a few feet away voiced the concerns of DC and Warner Bros. by calling out to Heath, “We are watching you! We are watching you!”

In lieu of an answer regarding the future, Heath provided a more personal response. “I will tell you the project that I would love to do.”

With that answer in mind, I could see Heath had earned his title as a DC Comics Historian, but I figured I would ask him about it anyway.

At this point, Heath let out a huge laugh, which left me feeling slightly confused, but it was explained soon enough.

What does it take to be a Historian of DC Comics?

“You know, that… I will tell you the background of how I became a DC Comics Historian: they called me to do special features for Flashpoint Paradox [The last film in the DC Animated Movie-verse before the Justice League: War reboot], and they said ‘Well as the writer of Flashpoint Paradox, we’re going to interview you.’ And I emailed the people doing what they call E.P.K., Electronic Press Kit, and I said, ‘Guys, I’m not the writer of Flashpoint Paradox.’ And they said, ‘Ha! You’re so humble! That’s wonderful! We’ll see you at 3 o’ clock.’ And I was like ‘No, guys! I DIDN’T write this movie.’ And they’re like, ‘That’s charming! Here’s the list of questions we’re going to ask you.’ And I go, ‘I’m not kidding! I don’t know why you keep saying this. I DIDN’T write this movie.’ At two in the morning, the day before I was supposed to go in, they were like, ‘Wait! Dude! You didn’t write Flashpoint Paradox!’ And I was like, ‘This is what I keep telling you!’ And they were like, ‘Well… we already rented the camera crew, and we already have you scheduled like maybe we can still have you come in.’ So they checked with Mike Carlin, who is the Head of DC Animation, and he’s like, ‘Yeah, Heath knows a lot of stuff about DC; let’s just call him a DC Historian, so that he can actually be interviewed.’ So I’m interviewed on the special features of Flashpoint Paradox as a..uh…Official DC Historian, and that’s how I got that title.”

Lucky you! No tests! Nothing to study!

“No tests, and I’ve been reading for quite a long time and I know a lot of stuff. So that’s how I got the title DC Historian because they kept crediting me for something I absolutely didn’t write.”

So what is it about the DC Universe that draws you to it? Why DC?

“I… I grew up a DC guy. I think DC’s got some of the best heroes, and they have absolutely the best villains. I mean they’ve got just the greatest rogues, and I’m a huge villain fan,” which quickly became obvious to me as I witnessed the giddy, childlike excitement Heath had when mentioning DC’s villains. “So that’s why my second movie, I got to play with the Suicide Squad, and they just took over the whole movie. They [DC Animation] came to me and said, ‘Hey! Do you want to do a Batman movie? And we have the Suicide Squad in it?’ And I go, ‘Why don’t we do a Suicide Squad movie? Oh! And we have Batman in it!’”

Heath and I then shared a laugh about Batman just doing a cameo in the film, but he continued his story, stating, “And they were like, ‘How would that work?’ So I was like, ‘I LOOOVE these bad guys.’ Um… I just….” Heath paused before getting back to the larger question from before. “I love these heroes. They’re classic. They’re iconic. And to get to stand on the shoulders of the people who came before me uhh… Alan Burnett, Paul Dini, Wayne McDuffie, just fantastic, fantastic writers in Animation. It’s just been a dream come true.”

From here I briefly switched gears to ask Heath about FIASCO, one of his other projects.

You’re also doing your own stuff, what can you tell us about FIASCO?

“Uhh… little to nothing. We haven’t sold it yet, but it’s a great project. I’m really excited to share that at some point.”

Finally, the time came to ask my favorite question in these interviews.

One last question: If the ‘you’ right now could go back in time to the ‘you’ who realized, “I want to be in DC Comics,” what would you tell yourself? What would be your advice?

While the last part of his advice may be funny, it is still very much sincere; this is the conclusion I came to regarding Heath Corson as well. He is a man who likes to joke but knows when it’s time to work. He is the kind of guy that will put every ounce of energy into his writing while still having a few laughs along the way, which makes this nerd happy to announce that the DC Animated Films are in good hands as long as Heath is involved!

Be sure to keep up with Heath on Twitter @HeathCorson, and definitely check out any upcoming work with his name on it, as well as the rest of my interviews from Phoenix Comicon!