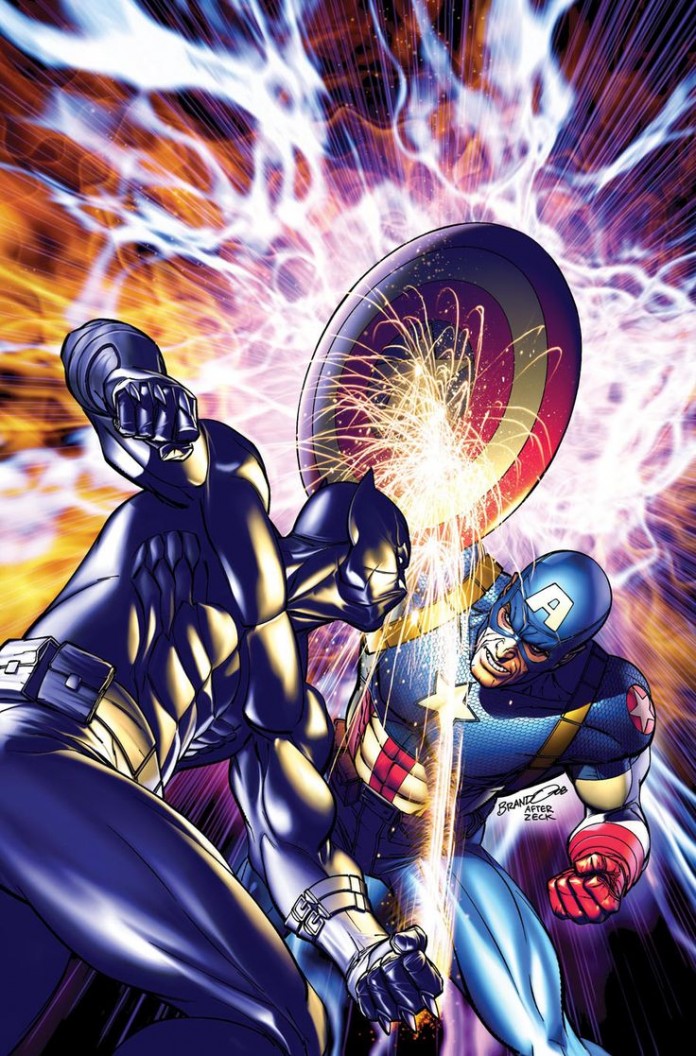 Oh, my…this is intense. Look, we know which side Black Panther is landing on in Civil War. Why does he support (ostensibly, anyway) the governmental accords enforcing registration and oversight upon the newly emerging super-human populace? Because he doesn’t want any more bat-sh*t crazy super-people blowing the hell out of civilians in his, or any other nation’s, back yard! Of course, Captain America – never pleased with the relinquishing of freedoms, or happy to surrender an old friend who, in this instance, WASN’T behind a massive explosion with a registered death toll – just can’t seem to get comfortable with relinquishing, or surrendering.

So, it’s come to this. I’m sure there are other reasons behind Black Panther’s involvement, and why he’s chosen to side with Tony Stark (Panther’s a clever one, after all), but here, now, he’s striking an Adamantium shield with Adamantium claws. Sparks? Of course! With all implements of destruction being equal in this particular contest, which breaks first? The shield, or the claw? DISCUSS!

What I really admire is the familiarity of this piece of Civil War promo art; it’s a take on several Marvel comic book covers where capable adversaries angrily applied their own Adamantium-laced offense against Cap’s trusted, circular, star-centered defense. The featured image for this very article, the cover art to Ultimate Captain America Annual #1, is a near-perfect replication of the Civil War promo art, and this fella’ below, predating both iterations, may be the progenitor of them all.

Comparing these 2 pieces and our article’s featured image, the attacker is always on the left, cutting down and across with the left hand, creating a cloud of super-heated sparks as neither invulnerable implement submits gracefully. Cap, always the defender, is positioned on the right, crouched, holding the shield and deflecting with his with right hand. Hmmmmm, I think there’s a deeper meaning going on here besides the spot-on reenactment, but I’ll let the potential subtext simmer for now. Anyway, here’s a question for you: Who wins in a battle between an invulnerable alloy and another, equally invulnerable alloy? Why, the person properly wielding said alloy, that’s who!