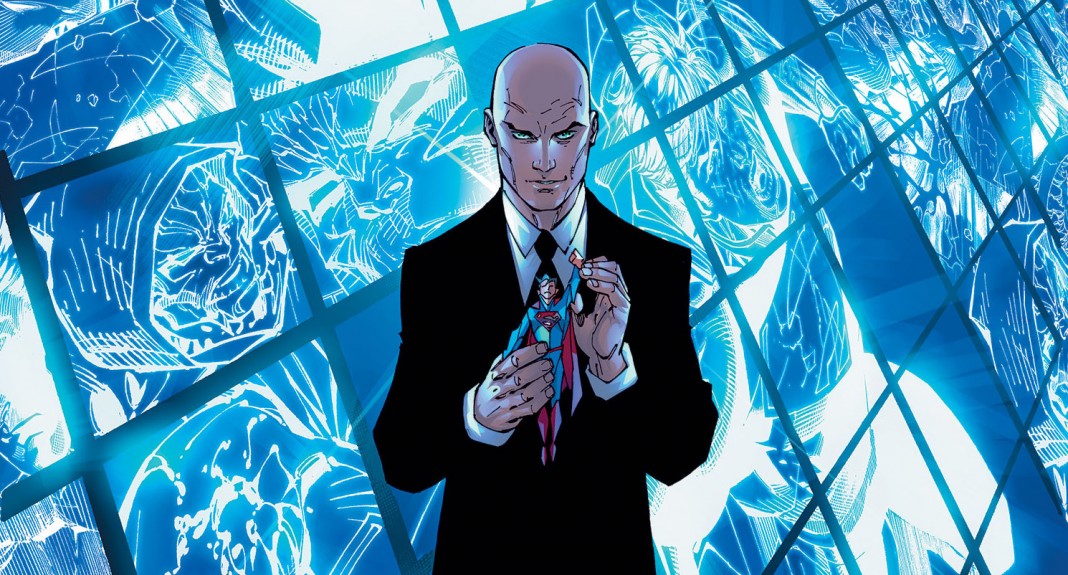 The bald man with a grudge against Superman isn’t just one of the oldest comic book villains in history – first appearing Action Comics #23 back in 1940 – he is one of DC Comics’ most formidable enemies. Despite his lack of physical strength as a regular, non-powered human, Lex Luthor possesses one of the greatest minds in the entire DC Universe. His creativity and unparallelled intelligence have driven him to become a strategist, a scientist, a billionaire industrialist, and most importantly, a threatening super-villain. Soon enough, Luthor will make another debut on the silver screen through actor Jesse Eisenberg as a part of the cast for Batman V Superman: Dawn of Justice. With his resentment towards Superman already apparent in multiple trailers, it’s time to take a look at some of Lex Luthor’s most dastardly deeds and wicked schemes to prepare ourselves for the impending insanity set to occur on March 25th.

1. First, we must venture back to the late 1980s to take a look at Superman’s second self-titled series. With John Byrne taking the duties of writing and penciling, he managed to write one of Luthor’s most sadistic stories in 1987’s Superman #2, entitled, “The Secret Revealed!”

Desperate to find out the Man of Steel’s secret identity, Luthor becomes obsessed with the investigation. After noticing Lana Lang – a longtime friend of Clark Kent – in the background of multiple pictures of Superman, Luthor has Lana kidnapped. His men drug and torture her – an innocent woman – for three days. After failing to get her to reveal any information on Superman, Luthor allows her to escape, only to follow her to Clark Kent’s apartment. Seeing her, Clark is outraged and flies to Luthor’s penthouse. Unfortunately, Lex has been expecting him and immediately kicks him out with the help of some kryptonite. Later on, as Luthor is extrapolating on all data concerning Superman, the computer informs him, as portended by the image above, that Clark Kent is Superman. However, upon hearing these results, Luthor is outraged! He wonders why a man with unlimited power would pretend to be a weak, insignificant human.

2. A few years later, in 1990’s Action Comics #660, Luthor reacts strangely to the news he has terminal cancer. Instead of trembling at the thought of death or the thought of his legacy not being enough, Luthor makes other arrangements.

Instead of creating his ultimate plan to defeat or kill Superman, Luthor decides to fake his own death in a plane accident. With the world believing him dead, he manages to create a new secret identity for himself when he has his brain transplanted into a younger clone of himself, complete with a red mullet. While this isn’t necessarily evil, it is one of those schemes that only Luthor could come up with and successfully execute.

3. No list about Lex Luthor could be complete without the next entry, which has some relevance given that it is an election year. Who could forget Lex’s greatest achievement? Who could forget that time Luthor won the United States Presidential Election in the year 2000?

There is not much more to be said about this; the man made himself president! In the first of the four stories in the issue, Luthor has Catherine Grant, a broadcaster at Galaxy Communications, edit out anything in her special that casts negative light on him. With this kind of power and influence, Lex is able to unfold one of his greatest schemes of all time and become the most powerful man in the free world, the President of the United States.

4. For the last moment, we find ourselves all the way back in the 1960s for what is possibly the greatest, strangest, and most evil scheme Luthor has ever planned. In November of 1961, Jerry Siegel wrote this iconic tale in Superman #149, entitled, “the Death of Superman!”

In order to be freed from incarceration and gain Superman’s trust, Luthor does the unthinkable… HE CURES CANCER. Seeing Luthor’s change in character and acknowledging his scientific achievement for the betterment of mankind, Superman attends his parole hearing to advocate for his release. A week or so after his release, Luthor sends Superman a distress signal from his satellite. Upon the arrival of the Man of Steel, Luthor springs his trap, projecting rays from green Kryptonite right at the unsuspecting hero who collapses in his weakened state. Take a look for yourself below to see Lex at his most diabolical, unveiling his master plan in front of an alarmed audience.

It’s a plan so cleverly deceptive and impossible that only Lex Luthor could have come up with it. What other villain could cure cancer in prison solely for their release? Hell, what other villain could cure cancer? Luthor is so unique because of his cruel, undeniable intellect. It’s what has always separated him from other villains in DC, Marvel, Image, or even Dark Horse comics, making him the icon he is today. With multiple incarnations in film, Jesse Eisenberg’s portrayal is just the latest in a long line of great men taking on a seemingly impossible task: defeating Superman through the application of his unchecked, unparalleled, malevolent genius.