Home MOVIES The Defenders “Under Consideration” for Infinity War 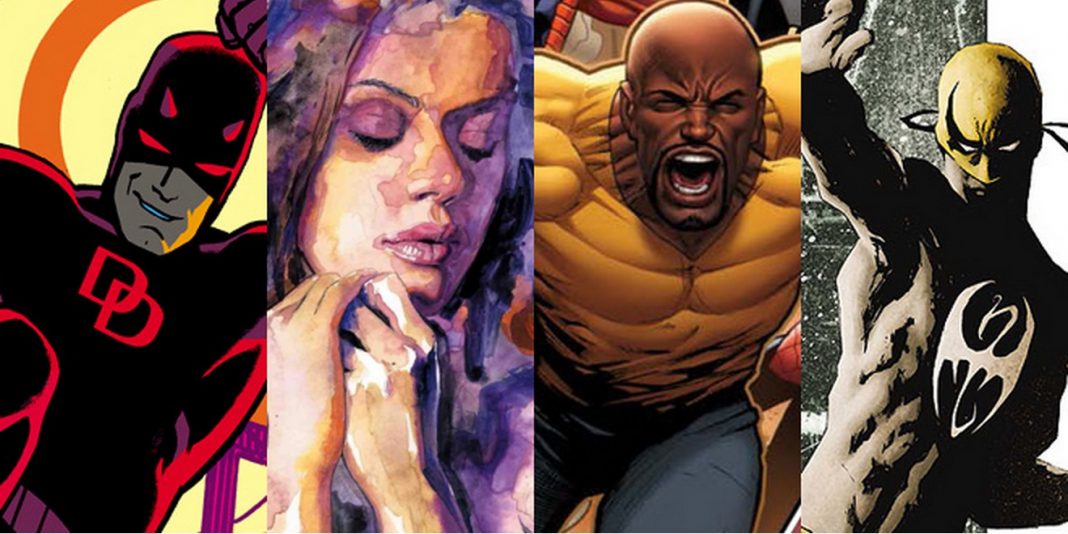 Iron Man… check. Captain America… of course. Spider-Man… was there any doubt? There are a few characters within the MCU that are a lock for showing up in Avengers: Infinity War. Now, all people care about is who is rumored to be dropping by, mainly a certain group who are getting together on Netflix.

The Defenders are stuck in their own world within the MCU. Daredevil, Jessica Jones, Luke Cage, Iron Fist and The Punisher will soon come together for their own climactic moment in New York City, but will they ever get the call up to the majors? Could all five of them… or even just one… show their face in Infinity War? Despite the long odds, it’s not entirely written off.

As part of their tour for the home release of Captain America: Civil War, the Russo Brothers have fielded numerous questions about who’s in, and who’s out of the next Avengers movie. Talking with The Toronto Sun, the conversation turned to The Defenders… and if the quintet is even on the directing duo’s radar.

“We do consider everyone,” said Anthony Russo. “We don’t want to get too specific about what’s going to happen with these movies. We want these movies to be a surprise for audiences.”

So you’re telling me there’s a chance! Well, perhaps Chris Pratt might get his wish in Star Lord meeting up with The Punisher after all! While it’s fun to dream about the Netflix shows and MCU movies coming together outside of background news clippings, it’s important not to get one’s hopes up. The Russos talked about how they’ve narrowed down their cast of characters from 66 onscreen individuals. That’s a lot of characters to consider for a limited amount of screen time.

“What we did in Civil War is exactly what we want to do in the Avengers… no matter how much screen time a character has, you can still have a lot of ambition for what you do with that character while you have them.”

A different way to look at that: while it would be great to include Daredevil, if he can’t be used properly, what’s the point? What the Russo Brothers are doing is ultimately a win-loss situation. While bringing in characters like Doctor Strange and The Guardians of the Galaxy should be more than enough to satisfy fans, there will always be someone complaining about  Defenders no-show, or a sever lack of the Agents of S.H.I.E.L.D.

On the bright side, it doesn’t mean there won’t be new faces joining up with the Avengers. While Jessica Jones and Luke Cage will be relegated to the five boroughs, someone like Captain Marvel could always be set to make her Marvel Cinematic Universe debut. Plus, it would allow the Russo’s to reconnect with Brie Larson… who the tandem worked with for three episodes of Community.

“It’s an incredible piece of casting. You couldn’t ask for better,” said Joe. “Not only is she an amazingly talented actor but she’s a wonderful human being. We’re really looking forward to the opportunity of re-teaming with her…”

Uh-Oh… was that a slip of the tongue? Anthony quickly corrected his brother, but perhaps Captain Marvel’s Infinity War arrival is the worst kept secret in the Marvel war room. Someone new needs to show up, and unless you’re bringing the Defenders onto the team (they’d look pretty good backing up Tony Stark), Carol Danvers is as good a choice as any to show up.

So will Daredevil swing alongside Spider-Man? Could The Punisher and War Machine share some ammunition? How about Captain Marvel and Iron Man flying side-by-side (until the inevitable Civil War 2!?!). The Russos are keeping all their cards face down on the table and probably won’t let any of us know until May 4th, 2018, when Avengers: Infinity War arrives in theaters.