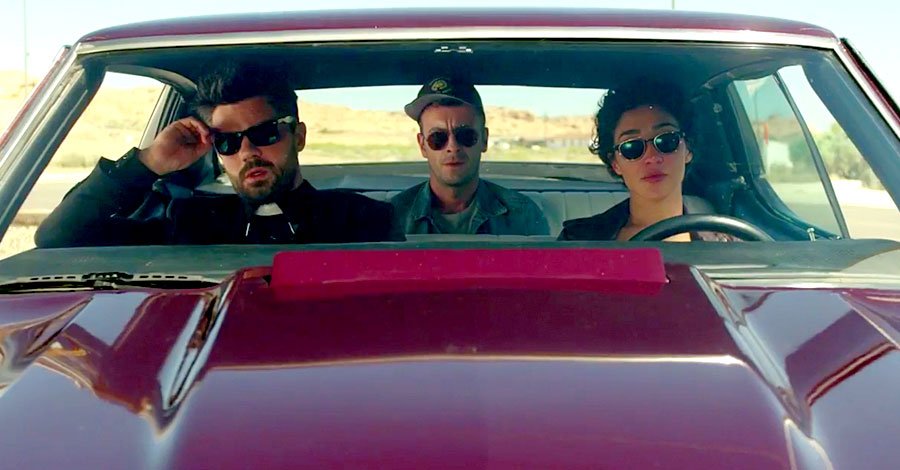 Over the last few weeks, AMC’s broadcast has blessed comic book fans with a brilliant adaptation of Garth Ennis and Steve Dillon’s series, Preacher. Sunday night, an epic finale for the first season was aired, featuring each of the characters at their very best. The finale was as brilliantly unorthodox as previous episodes while wasting no time in its hour-and-a-half run to set up the rest of the series. The Source has seen this shocking series finale and is ready to discuss it in our Preacher Season 1 Finale Review.

The episode begins after almost a week has passed. It’s Saturday, just a few hours before Jesse Custer’s ultimate church service, but it feels as though they skipped an episode or two. With a 10-episode build to the inevitable search for God, the desired outcome seems highly unlikely, but it happens nonetheless.

It’s undoubtedly strange to see Cassidy in a jail cell being confronted by Sheriff Root, who somehow has a container full of blood because he somehow deduced that Cassidy is a vampire, but it’s even stranger to learn that Jesse is hiding out at Donnie’s house. Honestly, it seems like we’re missing vital parts of the narrative.

Two episodes earlier, Donnie appeared desperate to get back at Jesse. Why else would he deafen his ears? But now, Donnie is “merciful,” and Donnie is forgiving. Even though he gives a partial explanation, I’m still asking, “Why? Did Jesse use Genesis, or are the writers just expecting us to go along with this?” Looking back on it now, it appears to be the latter, which wins the episode an award for having the worst opening, especially when considering last week’s opening with the Saint of Killers.

While Preacher has undeniably entertained us, we haven’t experienced the narrative we deserve, rife with Ennis’ stylistic, storytelling genius. Hopefully, in the next season, with the gang searching for God, we will finally be given a complete, precise story.

After this, the episode focuses on Jesse and Tulip’s relationship, finally revealing the oft-referenced heist that…

A. Went to crap thanks to unexpected, getaway driver abandonment.
B. Seriously pissed off Tulip. Like, she wants to kill him always.

Sadly and surprisingly, their relationship may have been the season’s strongest bit of storytelling. In our final glimpse of the infamous job with Carlos, the audience learns that Jesse and Tulip lost much more than just money; they lost their own baby. Finally, Tulip’s hatred for Carlos is explained. She is not just greedy or prideful, she is a grief-stricken mother; a husk filled only with rage. In response, despite his reservations and Christian morality, Jesse ultimately loves Tulip, and agrees to kill Carlos. However, Tulip stops him.

She realized she didn’t want Carlos dead. His death couldn’t bring the baby back. All she wanted was for Jesse to be willing to do anything for her, which he demonstrated by almost killing Carlos. Thankfully, and in typical Preacher style, Tulip and Jesse decided to beat the crap out of Carlos instead.

The next big scene comes with the momentous cameo by “God” himself. However, viewers slowly discover the bearded man on the throne is not God. As the impostor answers various questions, we wonder, “Shouldn’t God be giving more philosophical answers, more explanation, or are the writers really just that tired?” Luckily, those who have read the comics know the truth beforehand and enjoy laughing at this false God early on. Overall, the scene balances humor and serious questioning from Jesse, who finally abandons the idea that he was given Genesis for a reason.

From there, we see the town of Annville drift into life without Christianity as their moral compass.

Emily explains to her children that even without God nothing will change. Odin Quincannon’s men trash the Custer family church; the Savage and the Prairie Dog hang themselves together; the schoolgirls kill their pedophiliac bus driver; Tracy Loach’s mother smothers her without any hope to hold onto; the methane reactor’s monitor abandons his post to engage in an affair; and Odin Quincannon creates a meat version of his daughter, Lucy, as a slight homage to the comics where Odin created meat versions of people, typically for sexual pleasure.

After this, the entire town is destroyed, which is very different from the comics; however, it is not entirely a bad thing, depending on your own faith in the series!

In the comics, Jesse’s congregation is killed when he received Genesis, but in this new adaptation, the entire town is destroyed symbolically. Just before annihilation, the town drifted into chaos. Without God, they believed there were no consequences for their actions. Therefore, the finale stands as a message for the season and possibly the series going forward. In this crazy, twisted universe, God is needed. His children cannot be left alone, so Jesse must find him before the entire world suffers the same fate as Annville, Texas.

Even with its few missteps and lack of a concrete, overarching narrative, the first season of Preacher is successful, especially in setting up the rest of the series for seasons to come. The show has been funny, shocking, sweet, smart, unexpected, and flat out disgusting. What more can one want?

What did you guys think of the finale? Are you okay with the explosive change? Who do you think survived the blast? Preacher reviews will return when Season 2 comes around for more!

Keep checking The Source for future reviews and breaking news about all your favorite comic books, shows, and movies!