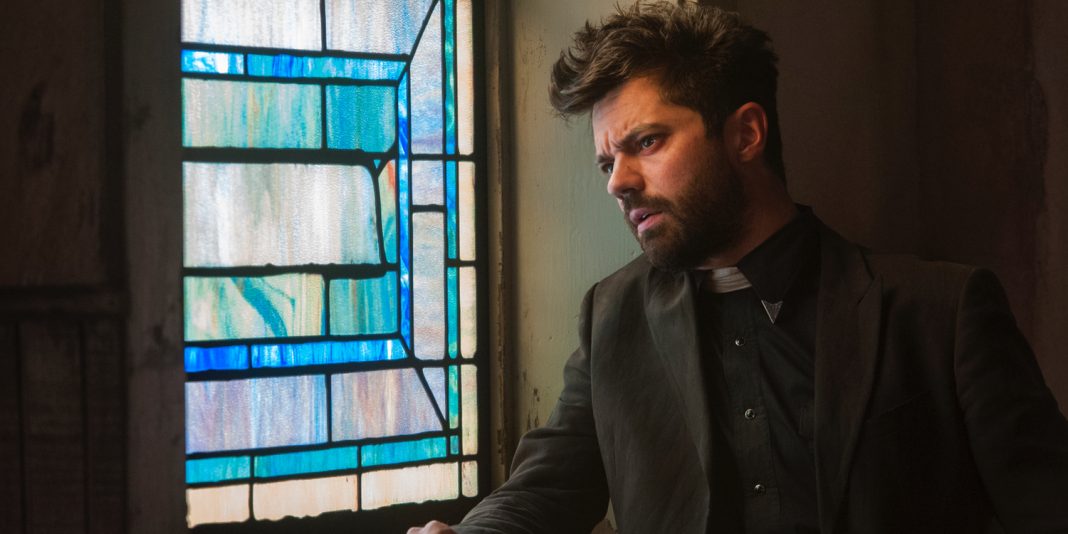 Last week on AMC’s newest hit, Preacher, an army rose, and Jesse Custer forced his friends away. Alone in the church, the audience was wondering what Jesse was going to do, but more importantly, the viewers were excited for the inevitable bloodbath between Jesse and Odin Quincannon’s army. This week, Preacher did not disappoint. Psychosis, surprises and promises allowed the 8th episode to meet the practically insatiable hype. All of this and more lies ahead in our Preacher Episode 8 Review.

The best piece of this episode is by far the element of surprise. These days everything on television and film feels so predictable. After nearly a century of movies, that’s not a surprising fact; however, when a show or film manages to trick the audience, it’s mostly rare and always welcome. In the case of “El Valero,” the viewers are outsmarted multiple times during the episode.

When the episode opens, the audience learns about Odin Quincannon’s haunted past and its role in the present.

Viewers see a ski-gondola plummet to the ground with the Quincannon family inside. From there, the scene moves to Odin’s office. He is covered in blood from both his family and a cow, trying to find a difference between the internal human and animal parts. In shock, Odin screams at Jesse’s father to denounce God, informing Odin’s antagonistic relationship with both God and the Custer family.

After this, the audience is taken back to the present to hear (but not see) another fight scene, which is starting to become a staple for Jesse Custer. Although it is nice to see him in action, it provides an interesting take on fight scenes in general and definitely makes Dominic Cooper and the fight choreographer’s jobs easier. Eventually the men retreat, and Donnie is desperate to know what Jesse told them. Shocked, Donnie learns that Jesse did not use his power at all and instead just kicked their a$$es.

From there, the audiences sees Jesse Custer alone in his father’s church. Well, alone as one can be with a few bottles of booze and dozens of weapons.

More importantly, Jesse is begging God, promising never to use his power if Eugene returns from Hell. As if by a miracle, Eugene digs up from the ground, reappearing from Hell; however, his presence is all an illusion, just a personification of Jesse’s damaged psyche. Although I’m sure the entire audience shuddered when Eugene answered Jesse’s obvious question.

“You dug your way out of Hell?”

Truly a tense and terrifying moment.

Yet despite these intriguing scenes in the opening, nothing beats the laugh we all shared at Clive’s misfortune. One of the best parts of Preacher is the mixture of horror and comedy. This episode lives up to that at Clive’s expense; however, viewers must remember that Clive is the one who accidentally killed Lacey in the fourth episode! Tulip wanted to do the following but ran into Cassidy, leaving Jesse to take care of it:

As Clive runs back to his fellow ‘soldiers of food court fortune’ with some heroic music playing in the background, he announces, “Preacher shot my d*ck off.”

Cue the intense laughter for all those who love dark comedy.

Last but not least, no review of this episode would be complete without mentioning the ultimate twist and Preacher’s promise.

Desperate to save Eugene and possibly terrified by the consequences of Genesis, Jesse tries to give it back to the angels, Fiore and DeBlanc. With Genesis back in the can, Jesse begs for their help in saving Eugene, but the angels refuse. In his rage, Genesis becomes active, breaking out of the coffee can and returning to Jesse. After this, the angels just leave unsatisfied.

From there, it’s back to the fight. Jesse once again holds the men at bay outside until Donnie sneaks up on him. Earlier in the episode, he was seen sticking his head in the trunk of a car to presumably kill himself. However, Preacher outsmarts us, wanting us to think he died instead of just deafening him. Without being able to hear, Donnie is immune to Jesse’s power and manages to capture him. Once secured, Odin and his men surround Jesse and attempt to force his signature to give Odin the church and its land. Here, Jesse learns that Odin is indeed serving “God” like he demanded; however, Odin is serving his own god, the God of Meat. Desperate, Jesse asks for one more Sunday, promising to bring God to Annville, but more importantly to Odin, he promises to denounce God in front of the entire town if God does not show.

The audience also finds out toward the end of the episode that Cassidy is still alive, but in what seems to be a psychotic, ravenous state. Lucky for him, it looks like Tulip is ready to do everything she can to help.

The eighth episode of Preacher follows the formula it has found in earlier episodes, but it manages to use this signature strategy with brains. The episode outsmarts the audience multiple times and keeps them engaged with twists, promises, and even some dark, dark comedy when necessary.

Be sure to check out future reviews for Preacher and all of your other favorite comics, shows, and movies here at The Source!