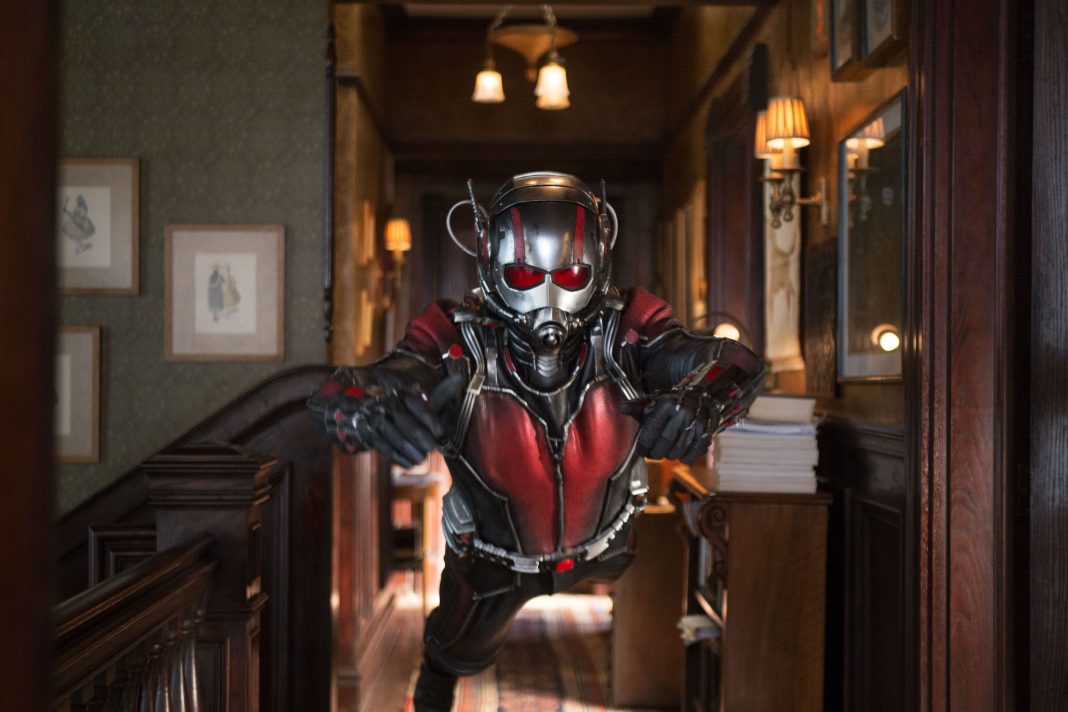 With the impending arrival of Captain America: Civil War, we are taking a look back at the movies that brought the MCU to this point. So take a trip back in time as we break down Marvel’s Phase 2 film-by-film. You can check out the reviews on Iron Man 3, Thor: The Dark World, Captain America: The Winter Soldier, Guardians of the Galaxy and Avengers: Age of Ultron here. Up next, our Ant-Man Retro Review.

The Summary: Scott Lang is just looking to straighten his life out and reconnect with his daughter. He spent two years in prison after burglarizing one of the top tech companies in the world. This act caught the eye of former S.H.I.E.L.D. Agent/Scientist Hank Pym who needs to stop his former company (and former protégé, Darren Cross) from recreating his revolutionary serum, the Pym Particle. Should the shrinking element get into the wrong hands… not even the Avengers would be able to save the day. So Pym enlists Lang and his team of bumbling burglars to save the day. Plus, it’s a movie that actually made you fall in love with an Ant. RIP ANT-ONY.

Pros: It’s probably the funniest movie in the MCU. Sure, Guardians of the Galaxy had its moments, but Ant-Man is the closest thing Marvel has to a pure Action-Comedy movie. Part of that has to do with leading man Paul Rudd. He’s charming and charismatic and his “Aww Shucks” persona fits in perfectly with the rest of the cast.

Speaking of the cast, Evangeline Lilly, Michael Douglas and Corey Stoll are all perfect compliments to Rudd’s Scott Lang. However, if there’s one MVP for me… it’s Michael Peña. Whenever Peña goes on one of his rants, it’s non-stop hilarity. His mindless Luis is a terrific addition to the movie. Let’s hope he gets more screen-time when Ant-Man and The Wasp return in 2018.

Cons: Listen, I like Edgar Wright. When he was first announced to direct, I was both happy and apprehensive. He didn’t seem like a director who would fit in with the MCU, which could have derailed any future Ant-Man plans (like no Rudd in Civil War). However, the idea of a Wright Ant-Man movie was so intriguing that I was sad when he left the project. Now, Peyton Reed did a fantastic job and I’m happy he’s on board with the sequel, but losing someone like Edgar Wright is always going to put an asterisk next to this movie. Sure it was terrific and exceeded expectations at the box office… but what would it have looked like if Wright never left? Perhaps Marvel’s Phase 4 can contain a “What If” movie… and let Wright make his original concept for Ant-Man.

Impact on the MCU: Well… Ant-Man let us know that Hydra was still up and running. It looked like the Avengers wiped them out following the opening sequence of Age of Ultron, but sure enough… they’re back. We also saw former S.H.I.E.L.D. Council Member/Current Hydra aficionado Mitchell Carson get away with some of Darren Cross’ faux Pym Particles… so expect Hydra to continue to be a thorn in the side of Scott Lang and Hank Pym.

One of the highlights of Ant-Man was watching Lang go subatomic to stop Cross’ Yellowjacket rampage. Lang falls into a Quantum Realm (where the original Wasp is still lost) in a psychedelic kaleidoscope sequence. This was our first look at the Negative Zone which will play a part in Doctor Strange… proving once again that science and magic can overlap in the MCU. From the look of the first Doctor Strange trailer, it appears they’ll take the small example of the Quantum Realm we saw and blow it up into mind-bending proportions.

Finally, we got one last “future” Avenger entering the fray. An after-credits scene saw Hank introduce his daughter Hope to the next-gen Wasp uniform. While she won’t be showing up in next week’s Civil War, we will get to see Hope van Dyne suit up in the next Ant-Man sequel, possibly leading to an appearance in Infinity War.

Ted’s Take: Ant-Man was probably my favorite superhero movie of 2015. I would even say my first time watching it in theaters was more enjoyable than my Age of Ultron experience. There’s a reason it made over half a billion dollars at the box office. Ant-Man was funny, with emotional moments that made it more than just a movie mocking the idea of a bug-named superhero.

The moment Paul Rudd was announced as Ant-Man I was hooked and he didn’t disappoint. It’s going to be terrific seeing him involved with the rest of the Avengers in Civil War... and from the small look we’ve gotten already, Scott Lang is going to fit right in.

It may not have had the grand expectations either Avengers movie had, or the massive action sequences like Thor, Iron Man or Captain America… but it didn’t need it. Taking the fight into a briefcase, or onto a toy train track is what made Ant-Man great. Despite following a similar superhero theme, it delivered the story in a way we’ve never seen before, proving yet again… that Marvel cannot be stopped.

Up Next: Nothing… Go Watch Civil War!!!